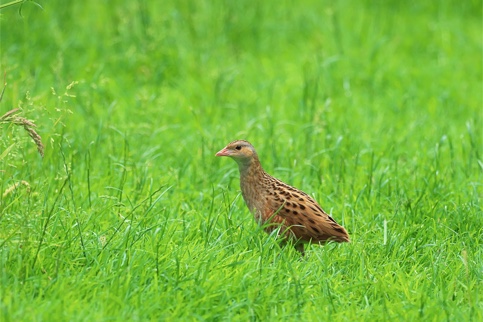 You’ll probably hear a male corncrake before you see one. Find out how we’re giving a voice, and a chance, to these endangered farmland birds.

Hard times and hard to spot

The corncrake’s distinctive call used to be a sign that summer had arrived, but their numbers are falling fast. Typically found on farmland, migrating to Africa in the autumn, they’re facing many challenges – loss of habitat and trappers being the most serious.

Pensthorpe Conservation Trust has been heavily involved with corncrake conservation for many years. In Europe, corncrakes are a more common sight, but they’re really rare in Norfolk. But since the start of our Wensum Valley release programme, which started in 2015, real progress has been made. In fact, as a direct result, wild-bred birds have returned to breed in East Anglia for the first time in 50 years.

Pensthorpe is home to breeding pairs of corncrakes, so every year we have eggs to monitor and chicks to release. We work in partnership with WWT Welney and the RSPB to monitor numbers around Norfolk. And all our corncrake chicks are ringed, so we can keep track of them.

1. When our corncrake chicks hatch, we keep a close eye on them to make sure they’re ok and then ring them – that means placing a lightweight metal ring around the bird’s leg with a unique number on it.

2. After 14 or 15 days, the chicks are transported to WWT Welney where they’re kept in pre-release pens for three weeks. This lets them get used to their new surroundings and gives them a bit more time to grow.

3. When they’re 35 days old, they’re released from their pens.

4. The chicks hang around for about a month before flying south to Central Africa, including the Democratic Republic of the Congo.

Corncrakes have been in decline in Britain for 150 years. By the 1990s, there weren’t any breeders left in England – you could only find them on islands off the northern and western coasts of Scotland.

Now, they’re considered a red-listed species – those in most urgent need of our help. Our breeding programme has never been more vital.

Have you heard a corncrake?

Corncrakes are hard to spot and like to hide in tall vegetation. The males have a distinctive rasping call or ‘crex’. If you think you’ve heard one, email crex@pensthorpe.com to let us know where and when the sighting took place – and send an audio clip or video if possible.